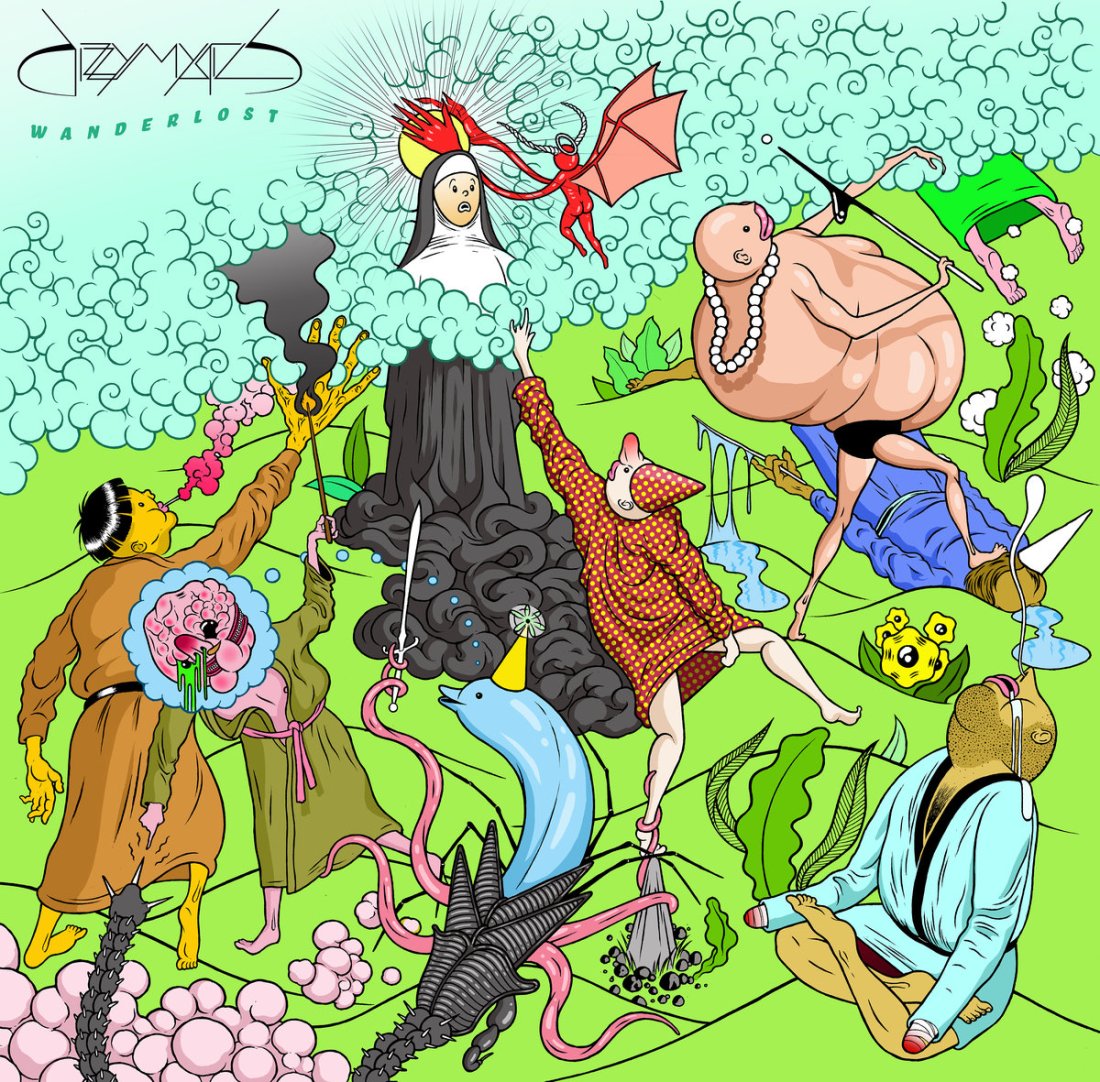 For fans of: Tool, RX Bandits, Children of Nova

Folk influences are pervasive. Mandolin and acoustic guitar are often given prominence, and the technical skill combined with the tempo can give some echoes of bluegrass at times. There’s even the occasional flash of 1980s-Rush-style-vaguest-hint-of-reggae touches.

“Letter” opens the album with a flurry of high-tempo arpeggios and oddly-metered strumming patterns. The rhythmic effect is off-kilter and disorienting, a recurring theme on Wanderlost. “Shindigjig” draws on folk sounds, giving mandolin prominent placement among the high-octane riffage and dramatic vocals. The bass, here and elsewhere, slaps and bounces with funky levity. The songs regularly display some impressive structuring. Despite their (relatively) short lengths, Dizzy Mystics move beyond simple verse-chorus structures.

Glimpses of metal do arise on occasion. “The Anti-Dream” is one of the heavier songs on the album, based around a strange, highly propulsive riff, though song’s second half slows down somewhat. This latter section is noticeably spacier and more psychedelic, leveraging an expansive guitar tone. “Diamond Duller” similarly displays some of the band’s most transparent Tool influence. The riffs are weird but melodic, and the vocals are especially reminiscent of Maynard’s.

I do have a few gripes with this release, though they’re mostly minor. “The Scythe Pendulum Swing” tries to be a slow-builder, but it comes off more as seven minutes of aimless meandering. Dizzy Mystics are never quite able to get the intensity up to a point that it feels like the song has progressed meaningfully. The jazziness of “Rester (Analog Chameleon)”, along with a few other quieter moments here and there on the album, doesn’t work well, either. This isn’t a band that can make an impact by taking it down a notch. Their strengths reside in frenzy and high-tempo theatrics. They also probably could have shortened this album by about 7-10 minutes, and it would be stronger; some songs run a hair too long.

Wanderlost closes on its epic title track, and Dizzy Mystics play to their strengths here. The riffs are fast, finger-twisting feats of technicality, and the song flows seamlessly overall. In addition to the band’s instrumental prowess, the vocals are impassioned and dramatic without coming off as ridiculous or overwrought.

Dizzy Mystics offer a unique take on progressive rock. Aside from some of the more common influences, like psychedelic rock, they integrate high-tempo folk, funk, and ‘90s alt-rock. It results in a distinct sound that sets them apart from most bands in the progressive rock scene.