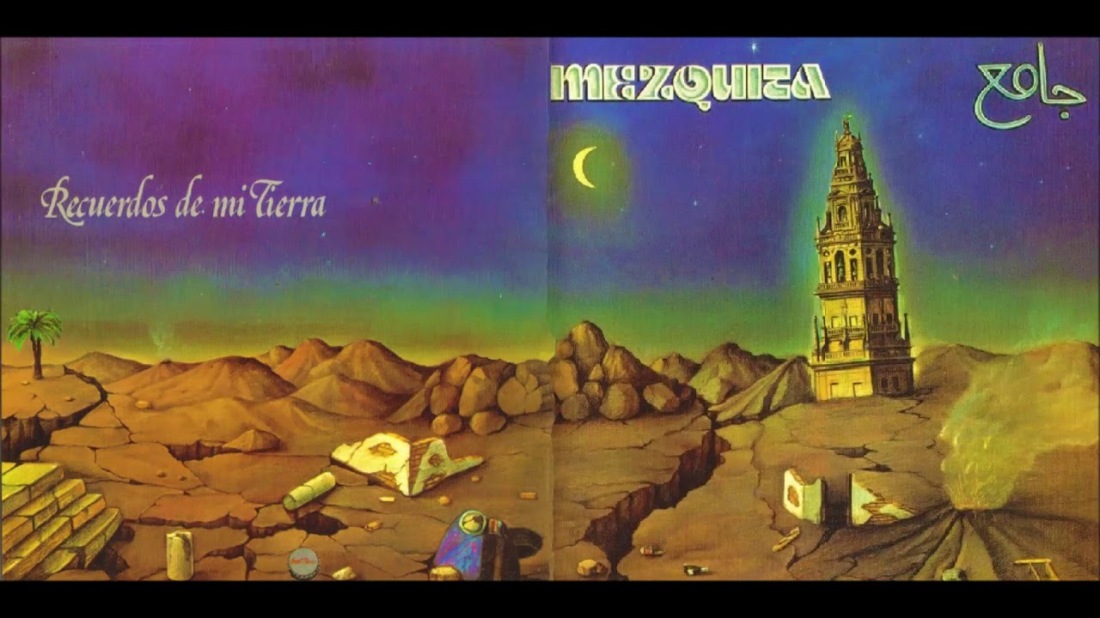 Córdoba was a stronghold of Islamic culture and influence from its conquest by the Umayyads in 711 until its recapture by the Castilian-Leonese king in 1231. Those five centuries of Islamic rule left an indelible influence on the region’s culture, most notably in music and architecture.

Mezquita was formed in Córdoba in 1978, in the wake of the death of Francisco Franco and Spain’s transition to democracy. This quartet drew heavily upon local Andalusian history as a center of Islamic culture: “mezquita” is Spanish for mosque, the album cover features Arabic text, and the music is powered by Moorish influences alongside Spanish ones.

Recuerdos de mi tierra is a dizzying album. It’s so packed to the gills with breakneck instrumentals it could plausibly appeal to fans of genres as disparate as math rock and thrash metal. It’s mostly instrumental, frequently following the pattern of beginning with several minutes of virtuosic musicianship followed by a couple minutes of impassioned verses.

The title track sets the mood immediately. After opening with a languid, Arabic-sounding synth line, the band kicks into high gear. Synthesizer and guitar alternate taking the lead and harmonizing over a galloping rhythm section. Flamenco guitar emerges in a calmer moment, acting as a contrast to walls of electric instrumentation. When the vocals eventually do enter, it’s over acoustic guitar and piano, highlighted with legato synth lines.

“El bizco de los patios” is one of the heavier moments on the album, replete with crunchy guitar chords and ELP-inspired keyboard leads. This piece leads into “Desde que somos dos”, which opens with a flurry of drums, quickly joined by wild, jazzy bass, and Moorish guitar and keyboard lines. The song drifts into more traditional progressive rock waters at points, with huge walls of synth strings under a cosmic guitar solo, but it doesn’t linger long. The song features the least rock-like moments on the album in its verses. If it weren’t for the percussion, this section would be unadulterated flamenco music.

Side two begins with “Ara buza (dame un beso)” and its wobbly, lurching synth lines, punctuated by flamenco handclaps throughout. The verses once more see the band moving in a heavier direction, but that quickly dissolves into a mercurial, bubbling series of guitar and synthesizer solos. “Suicidio” is reminiscent of the title track as it opens with high-octane riffage. The alternating solos and verses shift to a slower tempo, powered by a droning synth juxtaposed against the lively rhythm section.

The closing “Obertura en si bemol” is the jazziest cut on the album. Energy builds with the band’s trademark weirdness, but it’s honestly a puzzling choice for an album closer. This song doesn’t end with the sort of big punctuation this album calls for. Had this song and “Ara buza” been switched, that small change would have made this album even closer to perfect.

It’s a pity Mezquita couldn’t build a better career off such a strong debut. Their follow-up, 1981’s Califas del rock, is a drab mess. Sure, the Andalusian sounds are there, but they’re buried under feet of uninspired hard rock riffs and some of the worst synthesizer tones the 1980s had to offer. The band split up a few years thereafter, and though they re-formed in 2008, they haven’t put out any new studio material. Perhaps that’s for the best. We still have this one amazing album, and this band doesn’t need any more lackluster new material to sully their legacy.