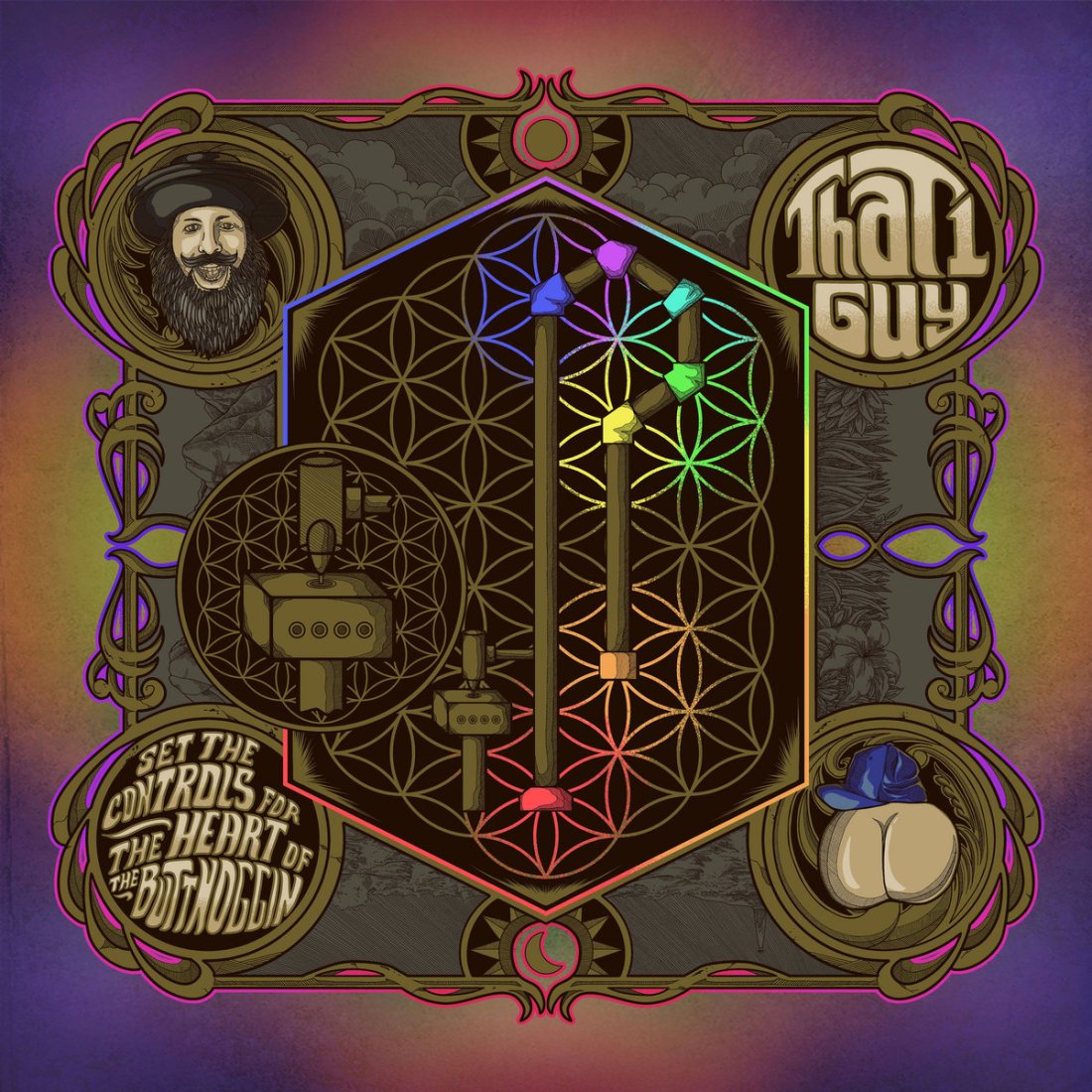 Artist: That 1 Guy | Album: Set the Controls for the Heart of the Buttnoggin | Genre: Experimental rock, Electronic, “experimental ‘earthshaking future funk’ from the future maybe” (as per his Facebook) | Year: 2020

For fans of: Buckethead, Primus

That 1 Guy is one of my favorite musical acts. I’ve seen him live over a dozen times since I first saw him open for Porcupine Tree in 2009. He tours relentlessly (or at least he did prior to this current COVID-related lockdown), and I would strongly recommend going to see him live if you get the opportunity. As his name implies, he’s a one-man musical project who plays the Magic Pipe, an instrument of his own invention. The Magic Pipe is depicted on this album cover, but here is some footage of it in action.

As much as I love That 1 Guy, I wouldn’t label him as progressive rock. He certainly has an experimental flair—what with the homemade instrument and all—but most of his songs are, structurally, pretty straightforward. His previous album, 2014’s Poseidon’s Deep Water Adventure Friends, was his most ambitious to date, featuring surprisingly complex compositions and highly varied textures. So, when he released this album, I saw how long the songs were and the fact that he had tagged himself as “progressive rock” on Bandcamp, and I decided to stretch my definition of the genre to write about this release.

With a title like Set the Controls for the Heart of the Buttnoggin, I was expecting something of a spacey, psychedelic album. Y’know, like the Pink Floyd song this album cribs its title from. Instead, this is the album where That 1 Guy has most fully embraced his electronic musical influences. (My apologies to aficionados of electronic music; I’m not one of you, and I’m sure a lot of my terminology will be vague and imprecise.) He’d flirted with electronica on all of his previous albums, but it was never anywhere as overt as it is here.

Following the strange, short title track, “Bringing the Gnar from the Vague” is a very strong piece. It demonstrates a lot of his usual tendencies in the verses: the rhythm is simple, but his use of synth textures is much more complex and multi-layered than usual. The chorus features weird, diminished chords, off-kilter chimes, and an irregular but catchy melody. The lyrics are weird and goofy, which is a trademark of his. (Poseidon is his least-overtly-silly album, and even then, humor is a major element.)

That 1 Guy is no stranger to long tracks, but he’s always had his longest pieces close albums. Here, though, the 11-minute “Buttnoggin vs. That 1 Guy: A Post-Psychedelic Techno Fantasy in 6 Parts” is presented early. It starts off promising, with more dissonant chords and the electronic bluegrass flair of a bow on the Magic Pipe. But much of this song draws from club-style electronic music, particularly in its last few minutes. The lyrics on this track are also some of the goofiest, and that does get to be distracting for me. (At least in a non-live environment; the fun and silliness are some of That 1 Guy’s greatest strengths as a live performer.)

The instrumental “Joyshtick” is my favorite song on the album. It’s a soaring, melodic piece that wouldn’t feel out of place on an Ozric Tentacles record. His use of both a bow and finger-plucking on the Magic Pipe results in rich, contrasting textures: the former feels ethereal and atmospheric, while the latter is rich and earthy.

The closing “Electric Nipple (In Two Parts)” shows more multilayered synth arrangements and clever melodies in its first part. The second part, though, is more sinister, with heavily-affected vocals and darker synth tones.

When I first heard this album, I was unimpressed. It’s unquestionably grown on me, but it does have its weaknesses. The title track is a bizarre, scattershot two-and-a-half minutes that’s full of some pretty harsh, ugly synth tones. The song as a whole feels unnecessary and unfocused. It barely holds together. Additionally, many moments in “Buttnoggin vs. That 1 Guy” sound like something I’d hear in the background in a club scene in a movie, albeit with much more comical lyrics. And while I enjoy the slow-moving “Cosmic Sneeze (Buttitsnot)”, nothing about it is particularly distinct or noteworthy.

Set the Controls for the Heart of the Buttnoggin is not what I expected from That 1 Guy. But then again, it’s pretty hard to predict the moves of a man who invented his own instrument after growing frustrated with the limitations of a contrabass. This is an album that rewards repeated listens, as my initial reaction was on the negative end of middling. This isn’t his best or proggiest album (both those titles belong to Poseidon’s Deep Water Adventure Friends), but it’s an enjoyable stew of electronica, experimentalism, and humor.