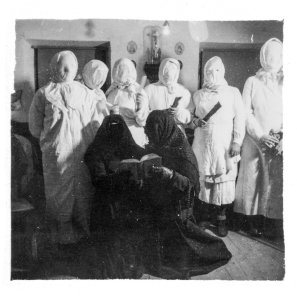 This Czech quintet play a noisy, chaotic blend of post-punk and prog. They make me think of a rawer, noisier Atsuko Chiba, or a more progressive Viet Cong/Preoccupations. Glassy synthesizers shine against jagged guitars, and the compositions twist and surge in exciting ways. Math rock flourishes are common, and squealing guitars contrast against a buzzing background. There are other surprising moments: the keys in the instrumental “Skelněná Krajina” give a feeling not unlike video game music at times, and the sprawling “Ken Kesey” features some electronic inclusions.

This album, while not strictly prog, is evocative of many prog and prog-related acts. The pulsing electronics are usually krautrock-y in nature, and the overall atmosphere is akin to acts like Kate Bush, Peter Gabriel, and Pure Reason Revolution. The compositions are dense, creative, and driving. Particularly praiseworthy are the varied yet cohesive textures in each composition; the album has a distinct feel to it, but no two songs are quite alike.

This Polish quartet performs a lush, cinematic variety of instrumental progressive rock in the same vein as Änglagård. Mellotron is prominent, and jazz tones are pervasive. And though Änglagård comparisons may be obvious, Fren successfully distinguish themselves. They’re jazzier than those Swedish prog giants, and many of the compositions have an alluring, jittery quality. The smoothness of Gilmour-era Pink Floyd is deployed in effective contrast to some of the darker moments on this album. I’ve got my usual reservations about the near-inescapable bloat of instrumental albums, but those concerns are far diminished here.

Gaffa Ghandi [sic] are an instrumental quartet from Berlin that blend stoner metal, math rock, and progressive rock into long and winding compositions. Mastodon is clearly a major influence on these guys, and Gaffa Ghandi manage to successfully channel that band’s (former) sludgy, proggy spirit. Great ideas are littered throughout this album. However, almost unavoidably, some of these songs do feel like they overstay their welcome. That problem isn’t chronic, but it does occur.

Kesem’s debut EP is fantastic. The songs are varied and blend space rock, progressive metal, and jazz into a unique gumbo of astral weirdness. Trumpet is smartly deployed as a lead instrument throughout the record, and the tonal contrast acts as a strong counterpoint to the crunchy guitar. Everything flows together, and there is a sense of continuity and thematic cohesion.

Phantom Scimitar are a Maryland-based trio who play a variety of psych-rock that draws from tropes both decades-old and contemporary. While the band cites Pink Floyd as their sonic forebears, relatively little of Circusverse sounds particularly Floydian. This album tends to use fuzzy guitar tones, and the melodies are more reminiscent of modern indie rock. All this aside, there are some good songs on this record, though the playing comes off as amateurish at times. Some ideas could have used more refining or workshopping, and other songs simply feel too long. This debut album is a decent starting point, so I’m hopeful they’ll improve on future releases.